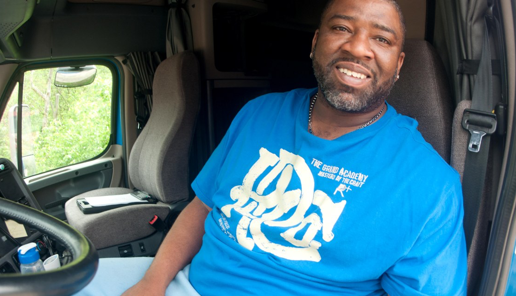 Ever since Karlos Jordan rode with his cousin on his truck driving route five years ago, he knew he wanted to become a truck driver. However, after spending time in jail, he struggled to find a job and didn’t know how to get into truck driving school.

Jordan was apprehensive when someone mentioned he should try OhioMeansJobs (formerly the SuperJobs Center), but he decided to go anyway.

OhioMeansJobs Cincinnati – Hamilton County helped Jordan apply and get in to a truck driving program to get his CDL license almost immediately. He was also able to get fuel cards to drive to and from school because it was so far away from where he lived.

After five weeks of schooling, Jordan passed the written and driving test and started working a week later.

“It changed my life all the way around,” Jordan said.

Jordan now has a CDL license and his own truck. He said he owes his success to OhioMeansJobs.

“They do help a lot of people,” Jordan said.

Jordan said the staff at the center took him from “just working, to becoming a productive citizen.”

Can't find what you are looking for?