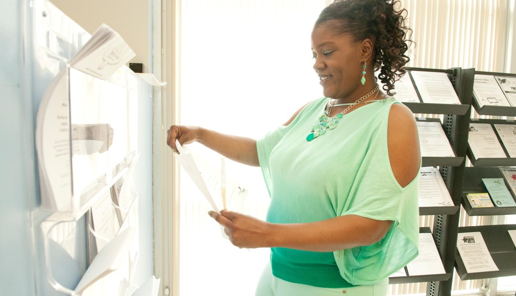 Ieisha Kennedy came to OhioMeansJobs Cincinnati – Hamilton County looking to create a better life for herself and her children. With the help of OMJ (formerly the SuperJobs Center) staff, she not only landed one job, but two.

When Kennedy’s son was diagnosed with autism, she left her previous job to take time to work with him. She knew her unemployment would be temporary and she had to get back to work to take care of her family. But she struggled to find a job because she couldn’t find child care and didn’t have enough information on job openings.

Instead, she began receiving public assistance.

After a year of unemployment, Kenendy learned about OhioMeansJobs from someone she met while riding the bus.

“I knew I had to get there and make a change for myself,” Kennedy said. “I had to do SuperJobs.”

When Kennedy went to OhioMeansJobs, she was able to utilize many of the resouces offered, including classes and mock interviewing.

But Kennedy said it was the hiring events and her career coach that kept her motivated.

Within two weeks, Kennedy was offered two part-time jobs. Now, she is able to support herself and her children.

“I feel good about myself again,” Kennedy said.

Can't find what you are looking for?